I'm currently enrolled in a Positive Psychology course from the University of Pennsylvania. It's actually a five course program which earns you a certificate when you are finished. As soon as you finish one course, you enroll in the next one. The psychologist, Dr. Marty Seligman, who was president of the American Psychology Association, founded Positive Psychology. Now it's being used all over the world, and even is being used in our armed forces to teach them resilience.

I've learned so much from these courses, and the focus is not on the negative, but on the positive aspects of life. Our human instinct is to protect ourselves and to survive. In the past, it was useful to focus on the negative, in case there was a dinosaur or wild animal lurking afoot. Now, this negative bias has permeated our society. One sees it in the news, that focuses on violent acts and crimes. Also, in the old days, psychologists focused on what was wrong with us. They studied mental illnesses and how to correct them, but over 70% of the population was normal. Because they didn't have mental illness didn't mean they were happy or had well-being. Positive psychology goes beyond just living. It teaches you about yourself and about how to see life differently.

Being a writer, I found these courses fascinating, particularly the character strengths that came out of the six virtues: wisdom and knowledge, courage, humanity, justice, transparency, and transcendence.

A website formed by Dr. Seligman of the University of Pennsylvania, called Authentic Happiness, has much information about this topic. There are free questionnaires and tests on the site. Also, to find out your character strengths, you can take the VIA survey. The top five character strengths are your strongest. These character traits can be used to help define characters in your novels. They can also help you understand yourself and the people around you better.

Here is a list of the virtues and their character strengths:

Posted by Patty Apostolides at 10:59 PM No comments: Links to this post

A few weeks ago, a colleague from our writers' group, Calliopi Toufidou, told me about the Los Angeles Greek Film Festival (LAGFF). Having lived in the area years ago, she knew all about it, and  said that Greek film makers would be submitting their films there and they would get voted on, and the best films would receive awards. She thought it would be a good idea to take our books and see if there were any film makers interested in them. Hmmm, I said, let me think about it.

I wrote to one of the board members of the LAGFF, Mr. Aris Katopodis, and he graciously invited us to attend the event as a VIP. So I accepted and flew there with my son and Calliopi. We represented the Hellenic Writers' Group of Washington DC (HWGW). The event started on Wednesday, June 7 with the opening night reception at the Egyptian Theater in the Hollywood/Highland area and lasted until Sunday, June 11. Around 50 films were presented during this time, including feature films, documentaries, and short films. www.lagff.org 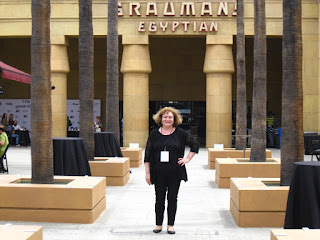 My son and I had gone there earlier in the day and were amazed at the amount of people walking along the sidewalks. The Hollywood Walk of Fame had a couple thousand stars ranging from Judy Garland, Ginger Rogers, to Adam West, Marilyn Monroe, etc. 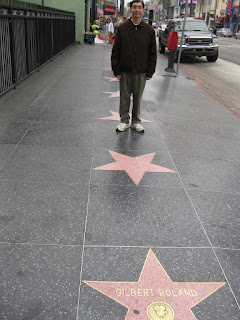 The next stop, was Universal Studios, where we took the studio tour and walked around, savoring the sights and sounds of this very popular place. We went on a weekday, but were pleasantly surprised to see so many people. 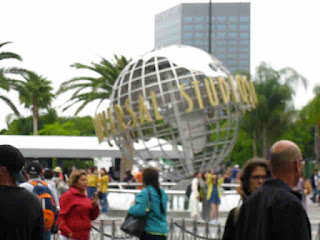 We visited the Harry Potter area, with the Hogart Castle: 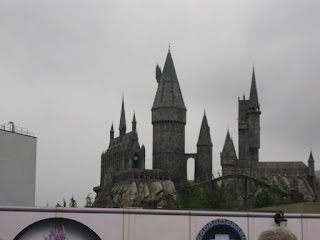 The studio tour took us to the site where the JAWS movie was made. 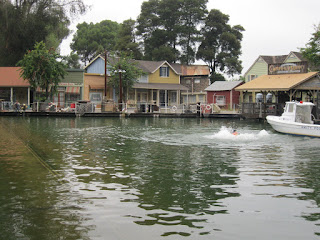 On Sunday morning, we visited St. Sophia Greek Orthodox Cathedral in Los Angeles. We were fortunate because that day they were ordaining a new priest, so two bishops were present. My son served in the altar and I sang in the choir. I met a very nice woman, Judy, who was president of the Philoptochos Society, and gave her one of my books. She was very pleasant and said maybe they can invite me to speak there one day. 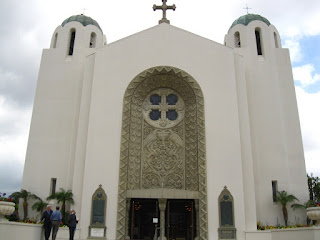 We finished the week with a trip to downtown Los Angeles, where we
stopped at the library for a short visit. 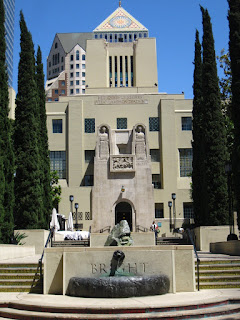 Posted by Patty Apostolides at 9:11 PM No comments: Links to this post