There are times in my life when everything comes together, and one of the highlights this year was my trip to Greece along with my book talk at the Sporos bookshop in Kifisia on Tuesday, June 4, 2019. This year was also special because I also met up with my college friend, Stella K., who I hadn't seen in years, and who happened to live near the bookstore, so she was able to come to the book talk. She and I had formed a Greek student organization while in college, so we had fond memories of that time in our lives.

I also wanted to mention my friend Zoe V., who helped organize my book talk along with another friend, Zinovia A. and the owners of Sporos bookshop. We worked on this event for several months. It was a good turnout; the people were attentive and I felt a connection with them, as if we were on the same wavelength.

The event started 7:00 PM and I was introduced by Zinovia A. who gave a warm welcome and a synopsis and enthusiastic review of The Greek Maiden and the English Lord (Greek Translation version). Then I spoke in Greek (with the help of Google Translate!) about my life, my family, how I happened to write my stories, and my career.

The talk was well received and there were a lot of questions - philosophical, etc. Thanks to Facebook, I was able to make these connections and forge new friendships! 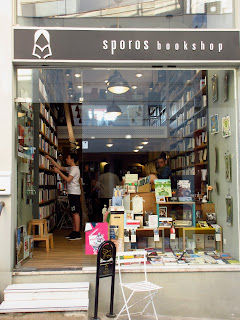 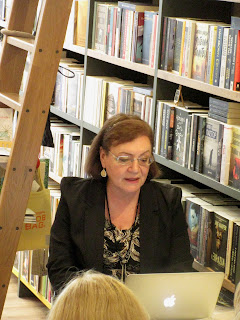 Talking about my life, my career, my books 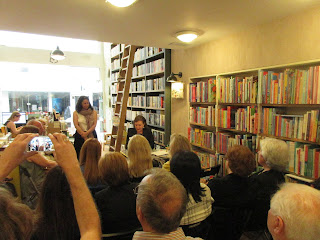 I was introduced by Zinovia, who is standing next to me

Posted by Patty Apostolides at 11:04 AM